Please join CUNY DHI and the Digital Praxis Seminar for a talk by Kathleen Fitzpatrick on the future of scholarly communication.
This event will take place on Monday, November 4, 2013 from 4:15-5:30pm at the CUNY Graduate Center in Room 9206/9207, and is free to attend and open to the public.We request you RSVP here, but registration is not mandatory: RSVP with Eventbrite (not required)

Kathleen Fitzpatrick: “Open Review, the New Peer, and the Future of Scholarly Communication”

Recent experiments in open peer review, as well as a recent study of open review practices jointly conducted by MediaCommons and NYU Press, suggest that online scholarly communication may be changing the nature of the “peer,” as well as the shapes of scholarly communities. This presentation will explore the history and future of peer review as a means of thinking through the issues that open review raises for communities of practice online. 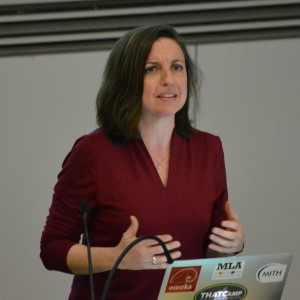 Kathleen Fitzpatrick is Director of Scholarly Communication of the Modern Language Association and Visiting Research Professor of English at NYU.  She is author of Planned Obsolescence:  Publishing, Technology, and the Future of the Academy (NYU Press, 2011) and of The Anxiety of Obsolescence: The American Novel in the Age of Television (Vanderbilt University Press, 2006). She is co-founder of the digital scholarly network MediaCommons, where she has led a number of experiments in open peer review and other innovations in scholarly publishing.

As a culmination of CUNY Open Access Week 2011, and in conjunction with the CUNY Digital Humanities Initiative, this panel will unravel issues surrounding open access scholarly publishing. Our panelists will share their inspiration for becoming open access advocates, their thinking about adopting particular licenses for their work, and the processes through which they have liberated their scholarship—from their perspectives as authors, editors and publishers.

The panel will include:

Members of the Radical Teacher editorial collective: Emily Drabinski, is an Instruction Librarian at Long Island University, Brooklyn, James Davis and Joseph Entin, both Associate Professors of English at Brooklyn College. Radical Teacher is a socialist, feminist, and anti-racist journal about the theory and practice of teaching. Published in print since 1975, the journal has recently decided to transition to an open access model.

Matthew K. Gold is an Assistant Professor of English at New York City College of Technology and of Interactive Technology and Pedagogy at the CUNY Graduate Center, where he serves as Advisor to the Provost for Master’s Programs and Digital Initiatives. He recently edited the book Debates in the Digital Humanities, which will be published through the University of Minnesota Press in January 2012 both as a printed text and an expanded, open-access edition on the web.

Michael Mandiberg is an artist and Assistant Professor of Media Culture at the College of Staten Island/CUNY and on the Doctoral Faculty of the Interactive Technology and Pedagogy Certificate Program at the CUNY Graduate Center. He is the coauthor ofDigital Foundations: An Intro to Media Design, Collaborative Futures, and the editor ofThe Social Media Reader.

Trebor Scholz is a scholar, artist, professor, chair, organizer and chair of the conference series The Politics of Digital Culture at The New School in NYC. His forthcoming monograph with Polity offers a history of the Social Web and its Orwellian economies. In spring 2011, he co-authored From Mobile Playgrounds to Sweatshop City (with Laura Y. Liu). Scholz is the editor of two collections of essays, Learning Through Digital Media(iDC, 2011) and a volume on digital labor (Routledge, 2012). He also founded theInstitute for Distributed Creativity that is widely known for its online discussions of critical network culture.

For more information about Open Access publishing, and CUNY’s 2011 Open Access Week events, see the Open Access @ CUNY blog on the CUNY Academic Commons, or get in touch with Professor Alycia Sellie: asellie@brooklyn.cuny.edu