May 8: Ramona Hernández and Anthony Stevens-Acevedo on the Spanish Paleography Digital Teaching and Learning Tool

Please join us on Tuesday, May 8, 2012 when the leaders of the Spanish Paleography Digital Teaching and Learning Tool project, funded by a Digital Humanities Start-Up Grant awarded by the NEH’s Office of Digital Humanities, will visit CUNY DHI to discuss their work to date. The project aims to teach users the paleographic skills required to decode early-modern Spanish manuscripts. 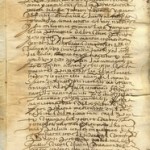 The Spanish Paleography Digital Teaching and Learning Tool aims to teach users how to decode and read the now abstruse three main handwriting styles in fashion in the early modern Spanish-language world. At the heart of the project is the creation of a website prototype where visitors will be able to consult, on the same screen, different samples of early-modern Spanish handwritings and line-by-line transcriptions into contemporary typeface. By a basic process of repeated visual comparison, the users learn how to decipher or decode the early-modern Spanish manuscripts – a learning that still today, for the most part, is restricted to very specialized university, archives and library settings.  Allowing Internet users worldwide to access this learning at any time will hopefully entice more students and scholars in the Humanities to conduct research on the early-modern Spanish world, while democratizing access to the paleographic skills involved.

About Ramona Hernández:
Dr. Ramona Hernández is director of the Dominican Studies Institute of the City University of New York (CUNY) housed at The City College of New York, and is Professor of Sociology at City College and on the faculty of the Graduate Center, CUNY.  She serves as a trustee of the International Institute of Advanced Studies in the Social Sciences (Instituto Global de Altos Estudios en Ciencias Sociales) of the Dominican Republic. Dr. Hernández earned the Ph.D. and M.Phil. in Sociology from the Graduate Center, CUNY; an M.A. in Latin American and Caribbean Studies from New York University; and the B.A. in Latin American History from Lehman College. She is also author of pioneering texts in the areas of migration, labor, and Dominican studies, including The Mobility of Workers Under Advanced Capitalism: Dominican Migration to the United States (named Outstanding Academic Title by Choice, 2002) and, as co-author, The Dominican Americans (1998). She is a trustee of the Sociological Initiatives Foundation.

Dr. Hernández and Stevens-Acevedo have recently co-authored the chapter ‘Dominican Americans’ for ‘Multicultural America: An Encyclopedia of the Newest Americans,’ Ronald H. Baylor, editor, 2011.  In 2011 they co-edited a special issue on Dominicans in the United States of “Camino Real,” the Journal of Instituto Franklin of the University of Alcalá, Spain, devoted to the Hispanic world in the United States.