May 1: Doug Reside (NYPL) on the Digital Creative Process of Jonathan Larson’s RENT

Please join us on Tuesday, May 1, 2012 when we will be delighted to host Doug Reside of the New York Public Library. 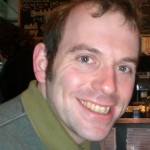 Doug Reside will discuss his attempts to reconstruct the creative process that produced the musical RENT by recovering and studying the digital drafts from Jonathan Larson’s original floppy disks.  Reside will also offer some reflections on his newly minted position as Digital Curator of the Performing Arts at New York Public Library and will suggest strategies libraries may employ for dealing with the coming onslaught of born digital research collections.

Doug Reside became the first Digital Curator of the Performing Arts at New York Public Library in February of 2011 after serving for four and a half years on the directorial staff of the Maryland Institute for Technology in the Humanities (MITH) at the University of Maryland in College Park.  He has led numerous Digital Humanities projects and is currently editing the Musical of the Month blog at NYPL which makes available one musical theater libretto each month in various ebook formats.